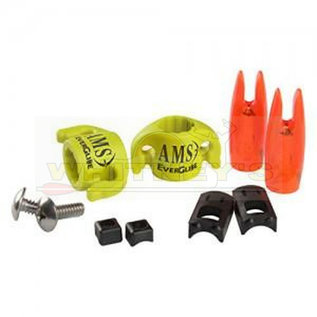 The AMS EverGlide Safety Slide is a proven performer time and time again with thousands of fish taken, including many big game fish over 300#. Simply nock your arrow with the slide in front or the rest, tighten the line to the reel and shoot. As you draw back, the slide will stay stationary in front of the rest. Upon release, the slide moves back to the tail of the arrow and stops at the shock pad, giving you perfect arrow flight. Always use an arrow slide, never tie your line directly to the tail of your arrow. Lines tied in such a way can tangle unexpectedly with the bowstring and cause the arrow to "snap back" after the shot. AMS EverGlide Safety Slides prevent "snap back" by keeping your bowfishing line separated from your bowstring at all times. Be safe, use AMS EverGlide Safety Slides. Made in America.